There have been so many versions of Madame Butterfly – plays and films as well as the Puccini opera – that its origins as a short story have almost been forgotten. This arresting piece of visual theatre, created by Ramesh Meyyappan, the Glasgow-based writer, director and performer, is less an adaptation of John Luther Longley’s 1898 tale than a distillation of its themes of love and lost innocence. At times the blend of physical theatre, puppetry and music is so eloquent you almost forget the piece is completely wordless. 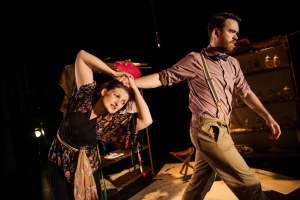 Ashley Smith gives a moving performance as the eponymous heroine, a free-spirited kite-maker, who captivates Martin McCormick’s unnamed, inscrutable customer, but falls in love with Meyyappan’s butterfly collector, Nabokov (a nod to the Russian-born novelist, himself a keen lepidopterist), only to find herself caged, degraded and driven to despair by both men’s attentions. If the symbolism is on the heavy side, the actors convincingly portray the shift in mood from wide-eyed first love to some surprisingly tough scenes of abuse.

If in outline this sounds a familiar melodrama, with echoes of everything from Madame Bovary to Lolita, Meyyappan’s piece gains greatly from its rich visual textures. The long list of creative collaborators includes Gavin Glover, creator of some delightfully expressive puppets, and Kate Bonney, whose beautiful lighting anchors the piece in a fluid, dreamlike atmosphere. The choreography, by Darren Brownlie, enjoys a precise and harmonious interplay with David Jones’s melancholic piano score.

Where the show becomes increasingly exhausting, however, is in its lack of leavening humour or irony. Butterfly’s journey is so earnestly portrayed that at times, particularly in the latter stages, you long to come up for air.

While the finale is not yet the amazing coup de théâtre it should be, there are plenty of high points en route. The most emotionally affecting moments are the most understated, including the scene in which Nabokov, jealous of his love rival, takes his revenge on Butterfly by roughly combing her hair, marking his territory with a kiss on her forehead. The most inspired images, including a baby flying on the end of a kite, and, above all, a tiny puppet of Nabokov, dressed as a mountaineer, climbing Butterfly as she sleeps, remain in the mind. There’s a genuinely ambitious visual imagination at work here.