The casting of Karen Dunbar as Winnie, the entombed heroine of Samuel Beckett’s 1961 play Happy Days, was always going to be an intriguing prospect. Though the actor and comedian has shown her “serious” acting chops on stage with a blistering performance as Rose in the National Theatre of Scotland’s revival of The Guid Sisters and in Phyllida Lloyd’s recent all-female production of Henry IV at the Donmar Warehouse, she’s still best known for her work in the BBC Scotland sketch series Chewin’ the Fat.

Yet, watching Andy Arnold’s painstaking production for the Tron Theatre Company, the shrewdness of his decision to cast Dunbar is evident early on. The performer, who first attracted attention for her ability to bring depth and humanity to the pathetic characters she played on television, is mesmerising as Winnie, a woman soldiering on in the face of her own decline. 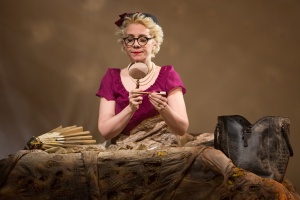 Of course, for a play that requires its protagonist to appear on stage buried first up to her waist and then up to her neck in a mound of earth, it helps that Dunbar is famously adept at acting with her face. Yet, although from time to time her nostrils flare and her eyes bulge, what makes her performance so satisfying is how real and recognisable she makes her character. In the first act, as Winnie goes through her daily routine, unpacking her belongings and chattering away to her husband, Willie (a hilarious cameo from Arnold himself), we warm to this woman who attempts to hold despair at bay through a mix of stoicism, endless activity and the comfort of dwindling memories.

But the mask slips and “sorrow keeps breaking in”. Winnie’s chirpy bravado grows shrill. The validation she seeks from her taciturn husband starts to look increasingly desperate. The scene in which she hides her tears behind the lid of a music box playing a fondly remembered tune is heartbreaking. Dunbar, who brings a certain levity to Beckett’s musical, elliptical writing, is even more poignant in Act Two, replacing Winnie’s earlier poise and vitality with a kind of weary resignation, as though she has been slowed down to 33 rpm.

The actress’s impressive performance is emphasised by Carys Hobbs’s set, which recalls both a scorched landscape and the vast skirt of a decaying dress, with the atmosphere further enhanced by Karen Bryce’s subtly switching lighting and austere sound design from Kevin Murray. As in the best productions of Beckett, Arnold, Dunbar and the company succeed in finding something compelling and new in an iconic work.