The name Jane Avril may not be instantly recognisable but the French can-can dancer’s image and appearance have long acquired iconic status. A star of the infamous Moulin Rouge nightclub in the late 19th century, she was known for her idiosyncratic style of dance, regularly attracting the unsentimental gaze of the painter Henri de Toulouse-Lautrec.

There is something of the fairy tale about Avril’s star-crossed life, and it is this romantic, fable-like quality that director Garry Robson attempts to harness in his production of Nicola McCartney’s new play. The action switches back and forth between the adult Jane’s (Pauline Knowles) aloof, enchanting performances in the showplaces of Montmartre and the painful upbringing of young “Jeanne” (Rachel Drazek) at the hands of a brothel madam.

The early portion of her life also includes a spell in the notorious Salpêtrière Hospital where Jeanne was treated as a faceless “hysterique” for displaying the jerking movements and convulsions she later incorporated into her dance style. 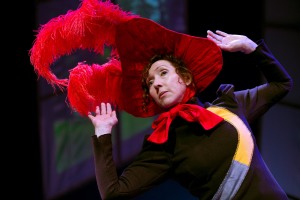 Knowles is compelling in the lead, capturing a mix of dignity, wry humour and sadness that is conspicuously at odds with the “Crazy Jane” label that was popularly attached to the performer. Indeed, McCartney’s script is full of sharp observations about the tension between popular perception and messy human complexity. The downfall and incarceration of Oscar Wilde is invoked, while we also bear witness to Lautrec’s (Buchan Lennon) protracted descent into self-loathing, alcoholism and madness.

Where the production frustrates is in Robson’s seeming reluctance to adequately vary the pace and tone. Dramatic sequences, including the scenes in the asylum, are reasonably well handled, and Robson and Jessica Brettle, the production designer, incorporate signing and surtitles for the deaf into the performances and set in a way that is elegant and unobtrusive.

Yet the Paris of the Belle Époque seems oddly becalmed here. Despite the energetic performances of George Drennan and Caroline Parker, tackling a number of roles between them, including Zidler, the exuberant Master of Ceremonies, and Jeanne’s formidable mother, the mood over the course of the play’s two-hour length is flat and monotonous.

There are compensations in Sergey Jakovsky’s atmospheric video projections and some fine colour lighting from Brettle, but you’re left longing for some of the kinetic energy of Lautrec’s iconic posters or of Baz Luhrmann’s dizzying 2001 feature-length pop video, Moulin Rouge!