What better way to kick off the Royal Lyceum Theatre Company’s 50th anniversary season than with a play about two old friends who have stuck together, for better or worse, for half a century? This much-anticipated Beckett revival, directed by departing artistic director Mark Thomson, also brings the careers of its two stars full circle. While Brian Cox was a founding member of the original Lyceum ensemble, Bill Paterson first performed in Edinburgh in 1972 as part of Billy Connolly’s The Great Northern Welly Boot Show.

Thomson may have pulled off something of a coup in enticing two of Scotland’s best-loved actors back to where it all began but there’s nothing flashy or ingratiating about their performances. Cox and Paterson’s Vladimir and Estragon are so meticulously portrayed that, by the end, the absurdity of their predicament feels entirely natural and inevitable. 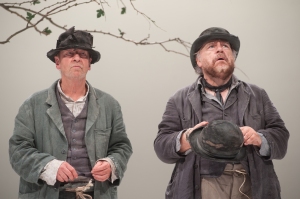 Their distinct characterisations are apparent almost from the opening tableau. Cox, as Didi, is restless and ruminative, frustrated by the limitations of his physique, at one point literally bouncing off the walls of Michael Taylor’s dazzling white set. Paterson, as Gogo, is the more resigned and instinctive, like a mechanical toy with an irretrievably damaged mainspring, occasionally roused by the possibility of money or food. The two actors play off each other’s rhythms, creating a believable relationship whose endlessly repeating cycle of arguments and reminiscences is akin to a long-lasting marriage. We see them topple into their old routines, sometimes intentionally, to fill up the void, and at times because they simply cannot help themselves.

Meanwhile, the scenes in which Didi and Gogo encounter John Bett as the tyrannical Pozzo and Benny Young as the servant, Lucky, are brilliantly choreographed, with each arresting virtuoso turn complemented by something detailed and precise in the background. While Thomson’s production is alive to the musicality of the writing, the set pieces are never over-egged. The sequence in which the two leads pass their hats back and forth, for instance, is hilarious precisely because it is so beautifully underplayed. It is a gem of a scene in a production that, while faithful to Beckett, never feels reverential.