Over the past decade the director John Dove has made the work of Arthur Miller a regular fixture of the Royal Lyceum’s repertoire. As well as offering strong, compelling productions of the acknowledged classics, including Death of a Salesman and All My Sons, he has also staged rare revivals of neglected works such as The Price and The Man Who Had All the Luck.

Hitherto notably absent from this list has been The Crucible, Miller’s 1953 play inspired by the Salem witch trials of 1692. It is not hard to see why Dove has held off from tackling the dense, ironic parable, which features a dramatis personae of some 19 speaking parts. What better opportunity to plunge into the play’s emotional vortex than the theatre’s 50th anniversary season?

Happily, this late arrival has been worth the wait, with the director marshalling his large cast in a well-paced production. While Miller famously wrote the play as an allegory of the anti-communist witch-hunts conducted by Senator Joseph McCarthy and others in the United States in the early 1950s, Dove’s production illustrates how the play’s broader themes of intolerance, hysteria and empowerment resonate beyond its original context. 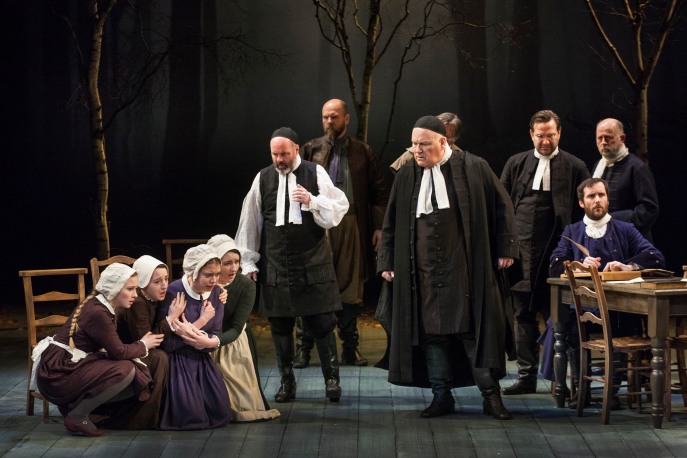 The director manages an agreeable balance throughout, between scenes bustling with activity and more intimate moments. The opening sequence, in which a group of village girls are coerced into claims of satanic possession, brilliantly establishes the characteristically fearful, irrational atmosphere in which innocent childhood games can be twisted into criminal wrongdoing.

Gradually the individual characters and their stories emerge from the throng. Meghan Tyler gives a striking performance as Abigail Williams, the wide-eyed serving maid who accuses Elizabeth Procter (Irene Allan) of witchcraft out of revenge for Elizabeth’s calling a halt to her affair with her husband (Philip Cairns). Among the supporting players, Kirsty Mackay stands out as Mary Warren, an uneasy witness at the subsequent trials, while Richard Conlon as the sceptical Reverend Hale and Ron Donachie as Danforth, the immovable representative of the law, make for a fine, contrasting pair in the court scenes.

The performances are complemented by fine visuals, with the earthy colours in Michael Taylor’s designs made painterly by Tim Mitchell’s crisp lighting. If there are one or two slipping accents among the ensemble, the principals appear at ease with Miller’s dialogue, and Dove delivers such a painstaking build of tension in the climactic scenes that he brings a real sense of jeopardy to a familiar outcome.