If you are going to stage Roald Dahl’s children’s adventure, the big fruit in question had better not be limp and past its best. Fortunately, when it comes to spectacle, Mark Calvert’s production for Northern Stage is both eye-catching and mouth-watering. The opening scene alone features the cast whizzing around the circular stage on scooters, a skipping routine and a basketball display, all set to Jeremy Bradfield’s jazzy live soundtrack.

The story may begin in a grey England of knitted tank tops and knee-length socks, but Calvert’s production (based on David Wood’s popular adaptation) very much borrows its look and sounds from the climactic scenes in the Big Apple. The vast, open performance space, created by removing the wall that separates the venue’s two regular theatre spaces, has been decked out to look like a high-end 1950s jazz club, complete with red curtains, polished floors, multi-levelled staging and a shimmering double staircase.

Technically, the piece is always impressive, from Rhys Jarman’s vivid costumes to the tight song-and-dance routines and toe-tapping soundtrack, much of it performed by members of the ensemble. Key sequences, such as an underwater battle with a sea monster, are effectively staged thanks to Colin Grenfell’s bold lighting designs, and the cast, appealingly led by Stan Hodgson, take plenty of opportunities to interact with their young audience. 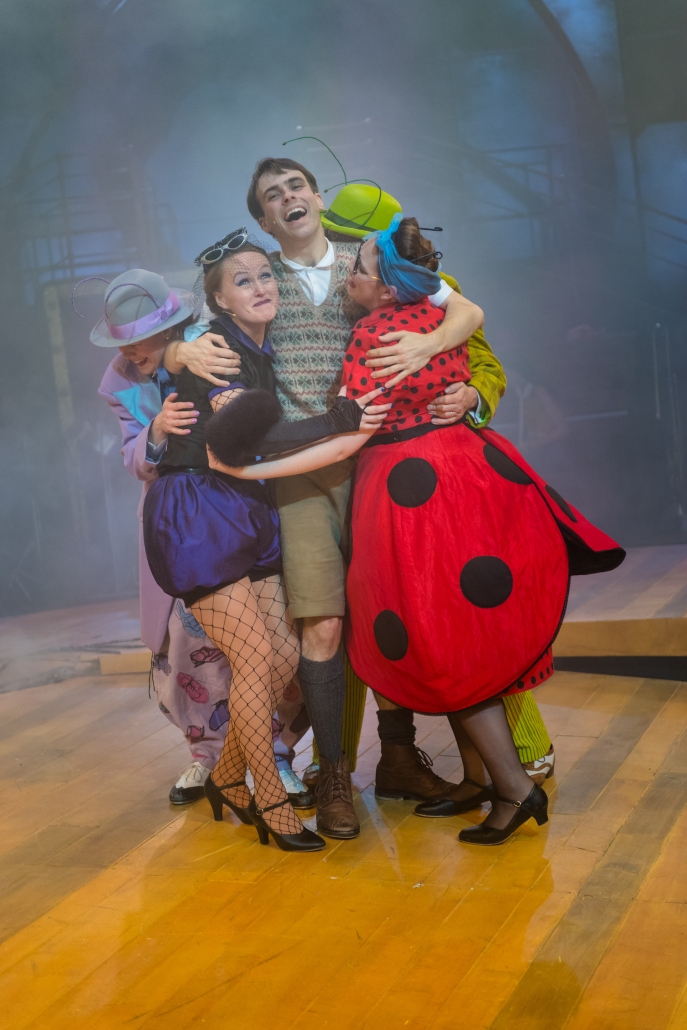 As strong as these production values are, there is a creeping suspicion that all the bells and whistles are mere distractions from Dahl’s narrative shortcomings. With all James’s emotional peril at the hands of his Aunt Sponge and Aunt Spiker (Michael Blair and Alice Blundell) resolved by the end of act one, the second half, in which our hero embarks on a transatlantic journey with his new-found insect pals, amounts to little more than a series of set pieces. Thus, while Calvert’s show is great festive fun, it comes to feel more like a colourful pageant than a truly nourishing piece of drama.