“Warning: this performance may contain nuts,” runs the notice along the bottom of the programme’s cover. Sure enough, there is a hint of almonds in the madeleine cakes that are served to the audience during one of the brief pauses in the action. Later on, we are treated to chewy medjool dates and squares of rich dark chocolate, accompanying a dram of anCnoc single malt.

The Red Chair, presented by Clod Ensemble in association with Fuel, is not the first production to include the novelty of culinary accompaniments to a performance, though you’d be hard-pressed to recall a play in which food plays such a vital role. The three interludes in which trays of light refreshments circle around the auditorium allow us to indulge ourselves alongside the compulsive protagonist while also providing Sarah Cameron with some much-needed respite from the intensity of her performance. 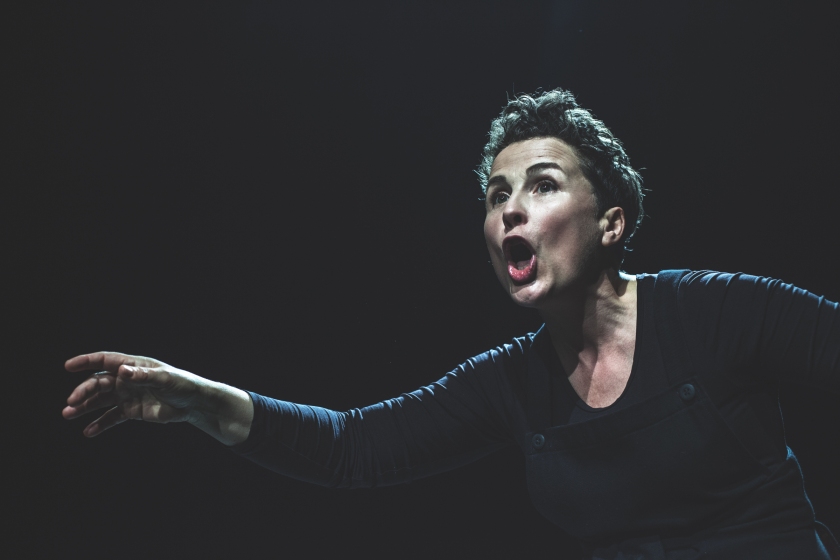 Cameron, an artist, performer and writer, not only narrates the 90-minute “faery tale”, conjuring up a symphony of voices, she also wrote and illustrated the piece, which is based on her own book. The story, told in a lyrical Scots, revolves around the corpulent figure of one Godwin Moir Williamson Caractacus, who, upon marrying, proceeds to gorge himself so endlessly that he becomes indistinguishable from the chair in which he sits. The other main characters in this fable-like portrait of family tradition and surviving patriarchy are Andrula, the “guid wife”, forever slaving in the kitchen, and Queanie, Godwin’s “Inveesible Child”, who escapes her expected life of drudgery.

As bold and simple as the narrative is, there are riches aplenty in Cameron’s text, which the performer mines with relish throughout. In particular, the sensuous descriptions of ingredients, recipes, food preparation and dishes in all their glory provoke everything from hunger pangs to queasy revulsion. At times this play is a cloying confection indeed.

The density of the writing does necessitate an unusual level of engagement from the audience. The food breaks allow us, as well as Cameron, to come up for air following sustained periods of ingestion. The pace and atmosphere are nicely modulated in Suzy Willson’s production, with occasional unexpected musical interventions, composed by Paul Clark and subtle yet varied lighting design by Hansjorg Schmidt. The compelling Cameron interacts faultlessly with these different elements. Like all the best storytellers she weaves a kind of spell around those who have gathered to listen to her.