First published in The Times, Tuesday May 9 2017

Graham Greene described his 1969 novel, Travels with My Aunt, as “the only book I have written just for the fun of it.” Indeed, there appears to be little urgent reason to revive the acclaimed theatrical adaptation, written by Giles Havergal, the former artistic director of the Citizens Theatre, other than for its sheer entertainment value. The play, first staged in 1989, and still regularly performed, can certainly draw appreciative laughter, even if it shows its age.

Havergal famously wrote his stage version for four male actors, all of whom appear clad in the vintage banker’s uniform of bowler hat, dark suit and crisp white shirt. The dreariness of their appearance stands in stark contrast with the colourful, action-packed nature of the story, which takes its recently retired narrator Henry Pulling from the safety of his flowerbeds on a journey across Europe on the Orient Express and on to further adventures in South America.

The quartet of performers in Phillip Breen’s production rises to the challenge of portraying around 20 characters, most prominently Henry’s septuagenarian Aunt Augusta, the adventurer and incurable romantic dreamer whom the risk-averse banker encounters at his mother’s funeral some 50 years after their last meeting. The characterisations are admittedly broad and over-the-top, but, in the spirit of classic Citz shows of yesteryear, the ensemble proves adept at switching between roles, often at dizzying speed. Special mention must be given to Ewan Somers, the “fourth man”, who has precious few lines, but is required to cover the stage, shifting props and chairs into place, and throwing himself with relish into the role of an amorous Irish wolfhound. 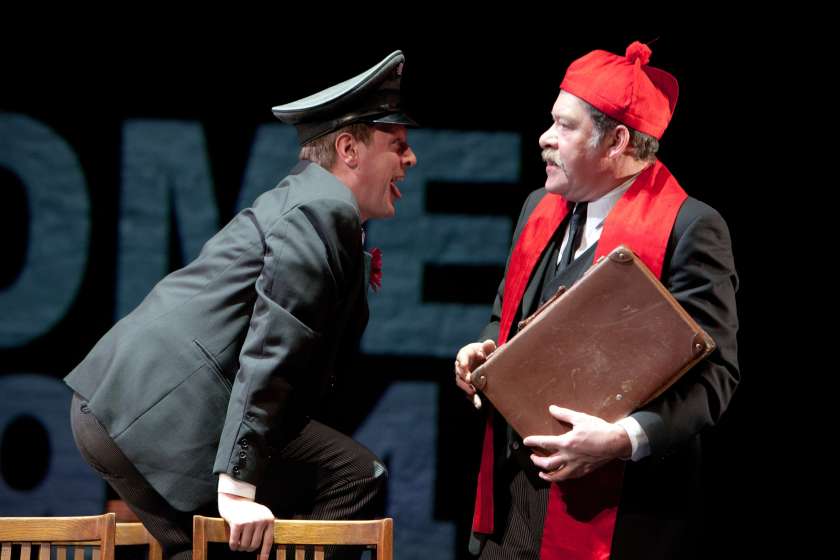 Somers, Tony Cownie, Ian Redford and Joshua Richards may flit seamlessly in and out of character, but the material itself is rather creakier. No amount of slick, pacy staging can distract from the racial stereotyping of some of the supporting cast. While Richards finds some nuance in his depiction of Wordsworth, Aunt Augusta’s devoted African paramour, the people and local colour Henry describes on his travels is cartoonish and decidedly old-world.

Nonetheless, there are plenty of funny moments in Breen’s production, mainly derived from the discord between the insipid Henry and his unconstrained aunt, with the density of the writing offset by the simplicity of the staging, evocative lighting design from Tina MacHugh and the dynamic performances.

One thought on “Review: Travels with My Aunt – Citizens Theatre, Glasgow”