The ability to transform everyday objects into the stuff of magical adventures is the very essence of imaginative play. An empty cardboard box becomes a pirate ship. A nailbrush zooms along the side of the bathtub, becoming a train speeding along the track. A courageous wooden spoon takes on a fire breathing washing up bottle in a battle for dominance over the kitchen table.

The latest work from Andy Manley, the leading children’s theatre artist, undoubtedly subscribes to the principle that less is more. The 40-minute show, aimed at children aged 3-6, takes place in a cityscape at night, with the dramatis personae performed by an assortment of delicate ornaments and bits of furniture. The moon, played by a flawless ball of light, is high in the sky. Lights are going out across the city. Manley’s omniscient protagonist keeps watch, checking that everyone and everything is winding down for the night.

The substance of the show, created in collaboration with Mariann Aagaard and Bjarne Sandborg for Denmark’s Teater Refleksion, is not dissimilar to A Small Story, another of Manley’s productions, which brought to life tiny bits of crockery and glassware to the delight of its audience of tinies. Indeed, in Night Light, a china dog barks and whines so convincingly that a child in the audience complains when Manley puts his pet away in a drawer. Cupboards and boxes are opened to release the gurgling of babies, snatches of music and the infectious laughter of one small rebel who refuses to go to bed. 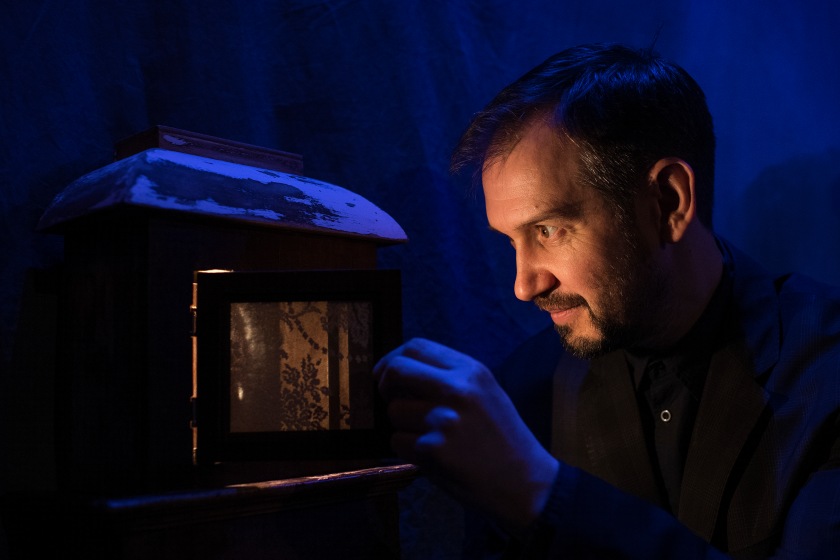 Once again, the piece, which Sandborg directs, benefits from a seamless interaction between the objects, the sound effects and music (created by Daniel Padden) and the beautiful, transformative lighting designs of Anders Kjems. Everything is accomplished with such precision that the suspension of disbelief is almost instantaneous. When one tiny dart of light is released from a container the eyes of the audience track its progress around the stage, rapt.

The show does sag a little in the middle and the lack of openings for interaction is something of a missed opportunity given the level of engagement from the young audience. For the most part, though, Manley’s calm, gentle presence pervades the entire room, creating a warm, relaxing environment, like a blanket pulled up to the chin. The show, which is currently touring, is likely to be one of the highlights of the Edinburgh International Children’s Festival (formerly Imaginate) when it opens at the end of May.