Meow Meow has long been a favourite among Edinburgh audiences for her appearances in outrageous solo shows such as Feline Intimate, not to mention last year’s triumph as the singing star of Barry Humphries’ Weimar Cabaret. This year, the Australian cabaret diva known for her bendy physique, onstage acrobatics and above-the-stage aerial flights occupies an even loftier perch at the International Festival: the Hub at the top of the Royal Mile, where she has taken up residence for much of August.

Indeed, the ornate surrounds of the festival’s cabaret venue make for a wonderfully incongruous backdrop to Meow Meow’s characteristic marriage of musical riches and kitsch aesthetic. One of the strengths of this new show is the effortlessness with which the performer navigates what should be jarring shifts in atmosphere, from gorgeous undersea romance, complete with bubbles showering down over the suspended chanteuse, to the unabashed vulgarity of recruiting male audience members to dress up in wigs and mermaid’s tails and provide some background shimmer to a showstopper. 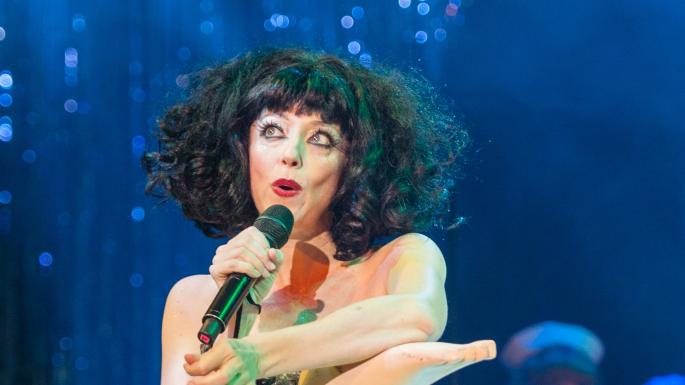 Little Mermaid deploys the building blocks of Hans Christian Andersen’s fairy tale to explore Meow Meow’s own tragicomic romantic history. The narrative is, of course, a pretext for a tirade of innuendo, self-deprecating gags and rapid-fire wordplay with the occasional break for our heroine to pour herself into yet another figure squeezing fishtail, don a pair of flippers or briefly interact with her blow-up rubber sex doll alter ego.

There is a meandering feel to the performance that belies the slick choreography and high production values: one can sense the control behind Meow Meow’s jittery persona. Her rich, soaring voice is the real attraction here, and her virtuoso take on everything from chansons to torch songs and power ballads is brilliantly supported by co-star Chris Ryan and the impressive Siren Effect Orchestra. A better ratio might have been struck between the spoken word (which drags on too long) and the fabulous music, but on the whole this makes for a fun, ephemeral late-night treat.