Fringe venues can be hot, cramped and unwieldy, but occasionally one finds a setting that seems tailor-made for a performance. The circular stage of the Roundabout could, at a push, accommodate a handful of actors at any given time. Yet Alex Griffin-Griffiths, playing Marc in this new play by Alan Harris, fills up the space, and reaches deep into the audience.

Griffin-Griffiths greets us as we file into the tented venue. He is pale and dishevelled yet already pulsing with kinetic energy. This opening exchange feels like a warm-up to the hour that follows, which is part theatrical tour-de-force, part endurance test. 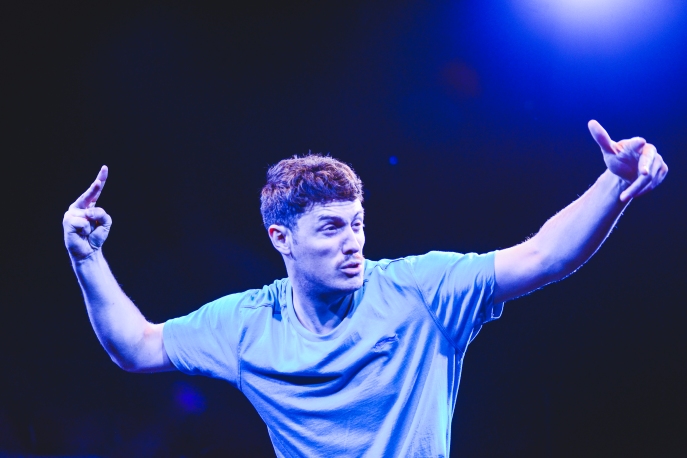 The actor twists every sinew of his body into Harris’s story of a small-potatoes Cardiff cannabis dealer who falls foul of Oggy, the local kingpin, when he tries to take over a debt incurred by his father while rekindling his relationship with an old crush, Lisa, now Oggy’s girlfriend, and the “sugar baby” of the title.

The basic narrative unfolds predictably enough as Marc embarks on a frantic dash around the city in an attempt to raise the cash and avoid Oggy’s wrath. The beauty of the script lies in Harris’s loving recreation of the city, from its seedy underbelly to the more salubrious enclaves. The clarity of the writing allows us to feel as though we are walking Marc’s journey alongside him. The scenario is peppered with surreal touches, including an intervention from the statue of Billy the Seal, the most famous resident of Cardiff’s Victoria Park. While enormous fun, it is unlikely that the show, directed by Catherine Paskell for Dirty Protest, would have the same impact if it weren’t for the warmth and dynamism of Griffin-Griffiths’s performance. While displaying an amazing facility for storytelling, the actor also finds space to ad lib and coaxes humour from brief interactions with the audience. His is undoubtedly a name to watch.