One can’t help but wonder whether this abridged version of the Scottish Play is the kind of thing Shakespeare would be writing if he were embarking on his career in an era dominated by small-scale studio shows. Frances Poet and Dominic Hill’s adaptation strips the tragedy down to its essentials, creating an intense domestic two-hander that requires its actors (Charlene Boyd and Keith Fleming) to divest themselves of everything but raw emotion.

Dispensing with prologue, encounters with witches and blasted heaths, Hill’s production plunges us directly into the relationship between the ambitious Thane and his “dearest partner of greatness”. We discover the pair in a state of what appears to be post-coital fever, on a bed surrounded by squalid remnants that would not look out of place in a Tracey Emin retrospective.

Otherwise, there are precious few clues as to where we actually are. Stuart Jenkins, the lighting designer, bathes the scene in a sultry pink, generating an oppressive, dream-like atmosphere. This couple might be fugitives on the run from the scene of their crime, holed up in a grubby hotel room, or they could simply be fantasists, indulging in extreme role-play.

The emphasis on sexual passion here is part of the show’s restless energy but their unwavering focus on the solace and claustrophobia of the marital cocoon also allows Hill, Poet and the actors to explore the Macbeths as a partnership whose power dynamics keep changing, with feelings of strength and resolve ebbing and flowing between them. Boyd and Fleming do a fine job of making us believe in the couple’s increasingly toxic co-dependency. 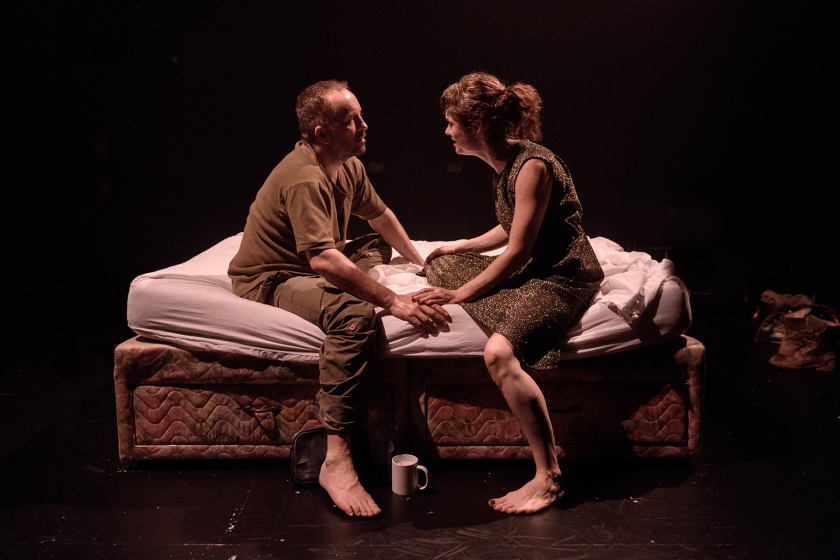 Poet’s reworking of the text is mostly successful, even if the 80-minute dash through the play’s highlights will offer little succour to anyone unfamiliar with the original. A certain awkwardness creeps in when it comes to the business of imparting vital information, however. The plot’s twists are explicated through the use of a reel-to-reel tape recorder and ghostly voiceovers.

For the audience of 60, seated around the walls of the Citizens studio, the experience of watching this long, dark night of the soul unfold is certainly intense and, for the most part, involving, even if the routine of dressing, undressing, drinking and having sex the couple goes through becomes a little repetitive after a while. While effective, Hill’s production doesn’t quite escape the air of academic exercise, albeit one blessed with strong central performances from Boyd and Fleming, who make some of Shakespeare’s most famous speeches sound as if they were brand-new.