As 2017 is an odd-numbered year, Johnny McKnight is not only writing the pantomime at the Macrobert but also directing and pouring himself in and out of a ludicrous selection of wigs and frocks in his role as dame. The artistic director of Random Accomplice switches between the Stirling arts centre and Glasgow’s Tron at this most wonderful time of the year.

McKnight and Stirling Stella, his panto parallel universe, are so popular among the local audience that you can sense the feverish excitement long before Alice Fitzwarren-Whittington, the star’s latest neon-clad matriarch with a heart of gold, has made her entrance. McKnight’s costumes, designed by Alison Brown, are eagerly anticipated and they do not disappoint. One of the wigs looks as though it was salvaged from an explosion in a spaghetti hoops factory. An outfit in the shape of a strawberry tart is so bulky and elaborate that it impedes the star’s progress up a flight of stairs. Cue delight in the stalls. 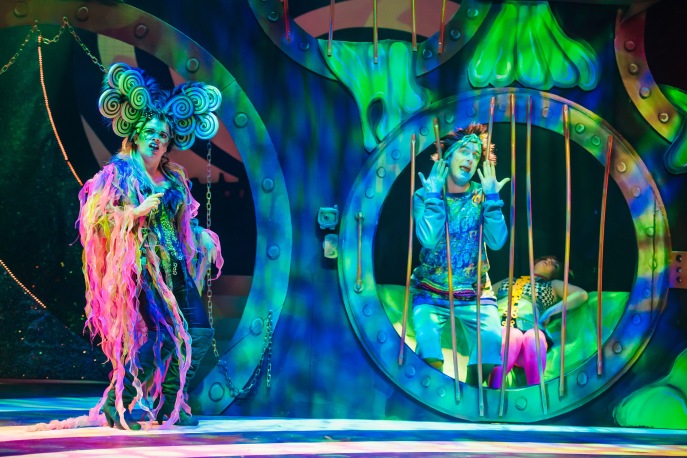 McKnight’s capacity to engage with and feed off the audience, ad-lib and dance surprisingly nimbly in a fat suit almost go without saying. As ever, he surrounds himself with a sterling ensemble, including Macrobert regulars Robbie Jack, playing clueless, thistle-haired son, Slick, and Helen McAlpine: wonderfully malevolent as a rat with a grudge. The newcomers are excellent, too. Emma Mullen, a recent graduate of the Royal Conservatoire of Scotland, makes for a strong, sympathetic heroine while Katie Barnett almost steals the show in the comic role of Queen Rat’s excitable sidekick.

If the template and some of the ingredients are familiar from the old panto favourite, the storyline here goes off on such a tangent as to be almost unrecognisable. Indeed, this version is something of a sequel to the story of the Lord Mayor of London and his cat, with elements of Rapunzel and Back to the Future thrown in for good measure. The plot requires the principals to travel back in time 50 years to get their hands on a contract signed by Dick, handing his firstborn daughter to Queen Rat on her wedding day, hence a surfeit of flower power references in the set, designed by Kenneth MacLeod, and some energetic hoofing in miniskirts, kaftans and thigh-length boots.

The story itself is a little confusing at times, defying logic at points, with an overall sense that the plot is of secondary importance to set pieces and topical gags. Still, there is typical subversion in McKnight’s depiction of a world in which women have all the agency and the square-jawed Dick (Duncan Brown) is a relatively minor character, while the energy of the cast and the rapidfire jokes, pitched at all ages, prove hard to resist.