It was in the aftermath of the Columbine massacre in 1999 that Steven Slater and Duncan Sheik conceived their musical adaptation of Frank Wedekind’s 1891 play about the unheard cries of young people. Fast forward 20 years and it is poignant that this energetic new production, featuring students from the Royal Conservatoire under the direction of Andrew Panton of Dundee Rep, is opening in the same week as a walkout of students across the United States in protest at yet another high school shooting.

So timeless is Wedekind’s depiction of adolescent torment in an oppressive, uninterested culture that Slater and Sheik might well have been tempted to shift the period setting closer to our own times. Their genius stroke was to keep the fin de siècle trappings and unwieldy costumes, with the cast performing an amplified rock score while dressed in knee-length socks and grey breeches or dirndl skirts. 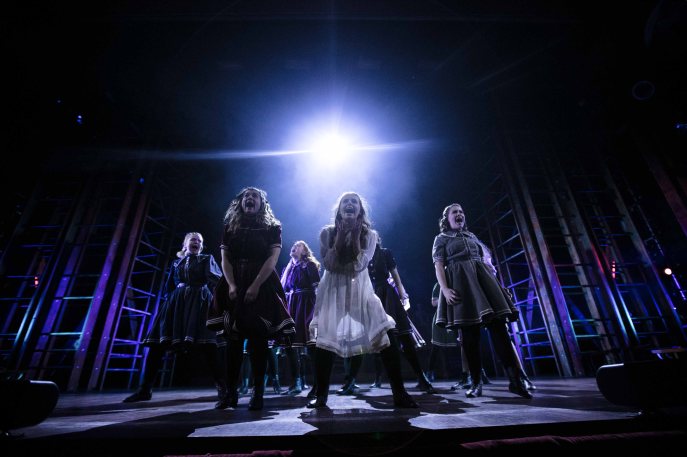 Panton and his impressive young company fully embrace this exhilarating clash of elements. At the show’s most explosive moments, a screen rises at the back of the stage to reveal the eight-piece band performing on a raised platform against a wall festooned with graffiti, in marked contrast to the more austere downstage elements of Kenneth MacLeod’s set. There are occasional problems with microphone levels and the balance between the musicians and performers isn’t always ideal, though these glitches actually feel befitting in the glorious uproar of the show’s most raucous numbers.

With its portrayals of repressed yearning, bullying, suicide, unwanted pregnancy and abortion, the story could quite easily sink into a quagmire of angst. Yet Panton never loses sight of the rich seam of irony in the script and lyrics, consistently undercutting scenes of impending disaster with humour.

The three leads – Max Alexander-Taylor as the intellectual square-peg-in-a-round-hole Melchior, Ross Baxter as his floundering friend Moritz and Sarah Michelle Kelly as the adventurous Wendla – are convincing and frequently endearing in their roles. Pia Hagen is moving as Ilse, an escapee from an abusive home, while Dundee Rep ensemble veterans Ann Louise Ross and Barrie Hunter make light work of various archetypal adult characters. While slightly less assured in its dramatic scenes, the chief pleasure of Panton’s production is the vibrancy of the big ensemble numbers, with the dynamic 18-strong cast whipping up an onstage whirlwind and sweeping the audience along in its wake.