“Star-cross’d lovers” is the theme of this year’s Bard in the Botanics, and in its pair of opening productions, the annual Shakespeare festival offers up the perfect complement of innocence and experience in tragic love.

Barr’s enlists nine actors for his stripped-down production, which is staged without scenery and a few key props in the narrow corridor connecting either end of the glasshouse. The director has adapted and rearranged scenes while eliminating characters and weaving in elements of the Restoration play, All for Love, John Dryden’s homage to Shakespeare, whose main interest lies in the relationship between Mark Antony and the Egyptian ruler in their final days. 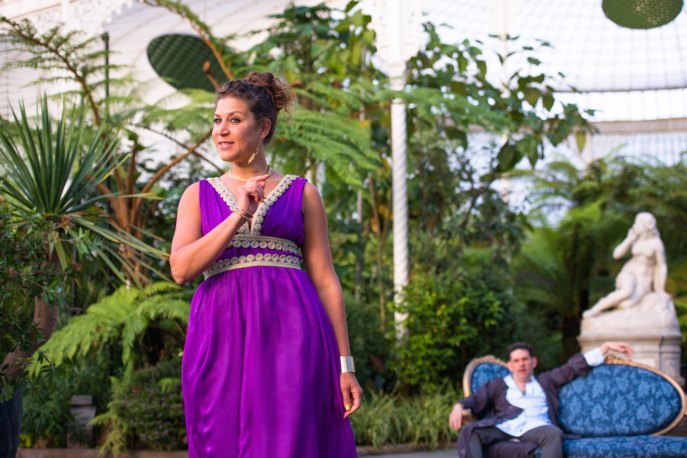 If the no-frills staging places focuses our attention all the more on the language and performances, Barr’s adaptation places a particular emphasis on the love between the title characters, both in its erotic charge and in the sense of the lovers’ understanding that their union is a potentially ruinous one. This tension is brilliantly evoked in the performances of the leads, Nicole Cooper and Andy Clark, whose characters appear magnetically drawn to each other, almost in spite of their own misgivings. Indeed, in their most intimate scenes together, Barr places his actors in formal poses at either end of the performance space, only for them to end the scene locked in embrace. 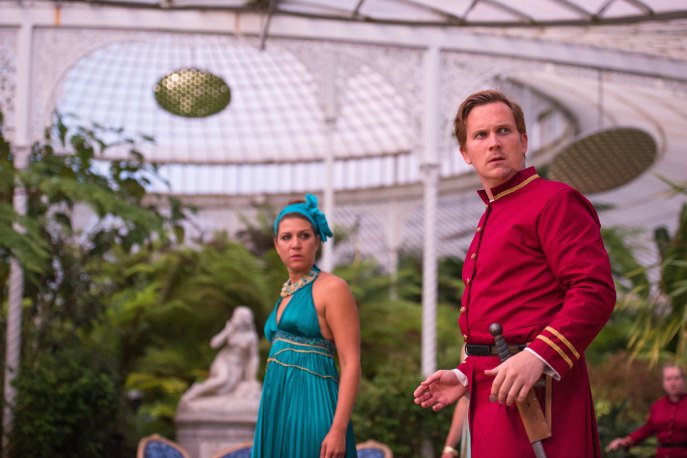 Indeed, Cooper and Clark bring forth such impressive nuance and depth of emotion that the production rather misses them when they are not onstage. Some among the supporting cast become marginalised or fail to summon up comparable performing energy, to the point where one wonders if Barr could not have whittled down the dramatis personae still further.

There are compensations, however, in the performances of Adam Donaldson as Enobarbus, Antony’s clear-sighted follower, and Laurie Scott, as Octavius Caesar, simmering with suppressed fury and entitlement. Inevitably, the leads are the rock solid dramatic centre here, though, and Cooper’s final monologue as she cradles Antony’s lifeless body is all the devastating for being experienced in such intimate surrounds.