If Picasso’s Women were an exhibition, it would fill several enormous galleries. Brian McAvera’s play for Flying Elephant wisely restricts its focus to three of the artist’s lovers and muses. The white walls and pillars of the performance space at Edinburgh’s Fruitmarket Gallery make a fitting backdrop for this triptych on a theme of passion and degradation.

Beyond the obvious art-world connotations, the setting ultimately comes to feel like a purgatory through which these women wander, literally hell-bent on reconciliation or revenge. It is no secret that the pre-eminent painter of the 20th century left a trail of destruction. “Women are machines for suffering,” he is said to have told the French painter Françoise Gilot, his lover for a decade.

Gilot, who is now 96, is not one of the ghosts haunting Marcia Carr’s production, though she is alluded to in passing. The first voice we hear is that of Fernande Olivier (played by Judith Paris), the model, whose affair with Picasso began in 1904. Paris’s performance is suitably otherworldly, precise and compelling, even if this portion of McAvera’s play feels the least nuanced of the three. Her tale brutally establishes the pattern for the piece as a whole: Picasso abandoned her without means when his career took off.

The most appealing performance comes from Colette Redgrave as Olga Khokhlova, the painter’s first wife. She struts around, snapping her fan, inflated with fury. While her story, like the others, ends sadly, she touches upon her own artistic life, as a member of the Ballet Russes under Diaghilev, which provides a welcome counterpoint to all the suffering. The final account, that of Marie Thérèse Walter (Kirsten Moore), who met Picasso when she was 17, is one of incredible ingenuousness, shot-through with dark humour. “He always needed so much and so often . . . and in such funny positions!” 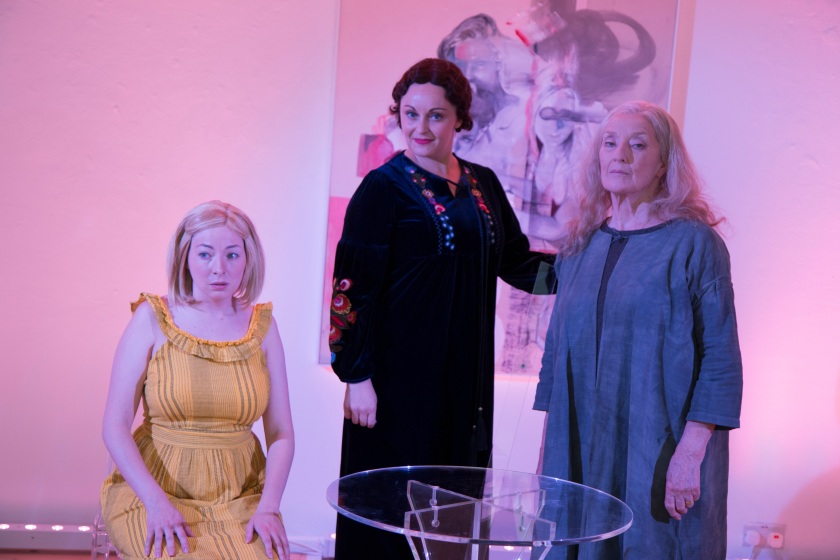 Admirably performed and inventively staged in the gallery, the show nonetheless labours its point: Picasso was careless towards women. These characters elicit our compassion but the play ultimately reinforces the need for more stories about women whose lives were not defined by great men.