The world premiere of this play from Sylvian Productions is far from the first time that the subject of compulsive hoarding has been addressed in theatre. Only a few months ago, Su Pollard, the comedian, appeared in a one-woman show, Harpy, at the Edinburgh Festival Fringe playing a character whose chronic inability to give up her possessions had provoked the wrath of her neighbours.

As the playwright Sylvia Dow acknowledges in her programme notes for Stuff, hoarding is a fascinating subject for writers because it is so deeply connected to memory and identity. The play opens on a familiar scene of stacked cardboard boxes, scattered objects and furniture covered with plastic dustsheets, but the action is more concerned with the rich inner life of its protagonist than the seeming haphazardness of her surroundings. 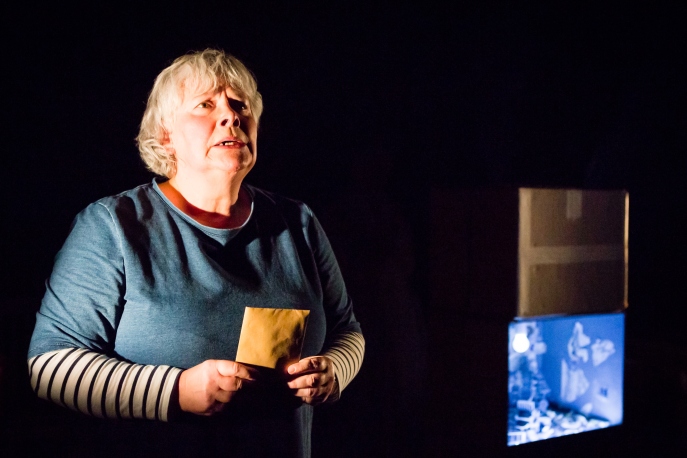 Like Pollard’s Birdie in Harpy, Dow’s Magda (named for the heroine of Puccini’s La Rondine and played with sympathy and understatement by Carol Ann Crawford) is at times viewed as a problem to be fixed, both by her daughter, Chrissie (Romana Abercromby), and Jackie (Pauline Lockhart), her social worker. To these compassionate, baffled outsiders Magda appears adrift on an ocean of detritus, but she sees things differently, imagining herself floating “on top of it all”, liberated from the everyday.

Predictably, Magda, originally from Croatia, has a backstory that she is determined to keep to herself, whose revelations are foreshadowed by the none-too-subtle appearances of Rosemary Nairne as the ghost of her opera-singing Mama. Nairne is first glimpsed in a corner of the stage, shrouded, like one of the exhibits in Magda’s museum. When she steps forth in a burst of song, her presence tends to overwhelm whatever else is going on in the scene.

Dow can’t resist explaining why Magda is the way she is, which is both cathartic while robbing the character of mystery or ambiguity. Rather than using hoarding as a metaphor for larger concerns, such as the isolation of the elderly, the playwright has created a very particular, though sensitive, character study. The director, Muriel Romanes, illuminates the small story with a rich theatricality, however, which includes a haunting use of Philip Pinsky’s music, stark, precise lighting from Jeanine Byrne, and an imaginative use of scale models designed by the artist/playwright John Byrne, which we are invited to admire in close-up at the end of the show.