The life of Mary, Queen of Scots is the apparent inspiration for this new play from House of Mirth, though its tone is less conventional historical drama than something akin to Roald Dahl’s Tales of the Unexpected. The tragic monarch doesn’t even make her entrance until halfway through the hour-long show.

The play, co-written and directed by Phil Bartlett, is on one level a compelling showcase for the talents of Sarah MacGillivray, the solo performer, who also co-writes. She alternates between the roles of a stressed-out London landlady and a naïve aspiring actress, fresh from Scotland, who winds up serving pints of Bishops Finger and appearing in the pub’s semi-legendary historical figure tribute nights. That these two protagonists are named Liz and Marie is a none-too-subtle nod to Liz Lochhead’s “twa queens on the wan green island”.

The script is an eccentric mix of observational humour and hokey melodrama. The only rules of the pub’s history night is that patrons have to dress up as famous dead people, which leads to a comic assortment of icons rubbing shoulders at the bar, from Gandhi and Churchill to Prince and Steve Jobs. Marie, who is developing a growing obsession with her royal namesake, wows the crowd with her immersive renditions of Mary’s most poignant speeches.

While the interludes in the pub are enjoyable, the play’s central conceit is never explored particularly deeply. It stretches credibility that Marie, guileless as she is, would have emerged from a childhood in Scotland without knowing anything about Mary, Queen of Scots and her symbiotic relationship with her English cousin. Rather than being used to explore shifting power dynamic, the tensions that develop in the play between Liz and Marie are little more than an awkward contrivance to bring about a bloody (and increasingly predictable) dénouement. 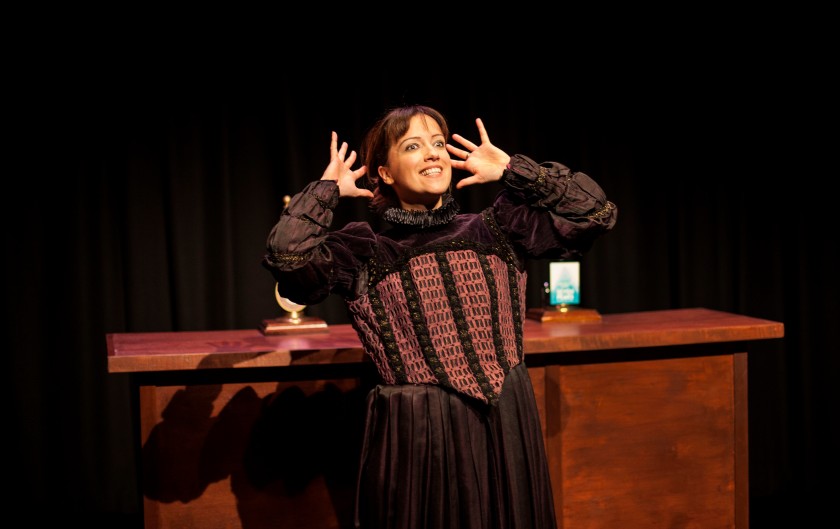 That the piece works at all is testament to the efforts of both Bartlett, who deftly manages the succession of short scenes, and MacGillivray, who nimbly switches among an array of roles. Overall, the play has the feel of an extended sketch or a long feed for the punchline of a knowing joke, but in its best moments it does mark out the company as one to watch.

Touring Scotland to May 11. Horsecross.co.uk