Occam’s razor — the philosophical principle that the simplest explanation is the most likely — is increasingly going out of fashion. Conspiracy theories abound, fuelled by online communities and jet-propelled by a growing distrust of conventional news and a general sense that the world is going to hell in a handcart, steered by shadowy powers with sinister agendas.

A Fringe show exploring paranoia and elaborate theories in an age of fake news couldn’t be more timely, but this three-hander from Barrel Organ, whose previous work includes the invigorating Some People Talk About Violence, is only interested in the most superficial elements of the phenomenon.

Pic: The Other Richard

The piece takes the form of a solemn presentation delivered by three flat-earthers, who argue that the iconic 1932 photo of ironworkers eating lunch on a girder during the construction of a Manhattan skyscraper was faked. Marker pens, maps and assorted documentation are all deployed as the trio spins an increasingly extravagant yarn that links the powerful Rockefeller family to everything from the assassination of JFK to the staged moon landings. 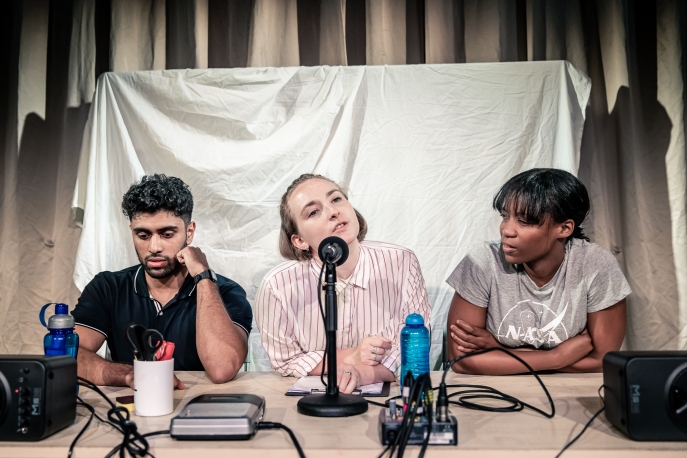 Pic: The Other Richard

Conspiracy is a scruffy show, meandering and rather stilted. If nothing else, Dan Hutton’s production does show how gratifying it can be to bend facts to support an argument rather than being led by empirical evidence. The fact that the three characters here bear the names of the actors playing them implies that we’re all susceptible to the allure of pseudoscience, but Jack Perkins’s script doesn’t probe deeply enough into the psychology behind such belief systems or the consequences that can arise from some of the more dangerous speculations. The show also betrays a depressing lack of empathy towards its characters. Rather than inviting its audience to understand such “seekers after truth”, they are presented here merely as deranged figures of fun.