Tanika Gupta’s adaptation of the bestselling memoir by Jackie Kay, Scotland’s makar (national poet), is full of moments that break the heart and stir joy. It was almost bound to be. The book, which weaves the author’s 20-year search for her birth family with memories of her upbringing as the mixed-race, adopted daughter of white Scottish parents, is written with an irresistible vitality and generosity of spirit. Its universality comes from its attempt to address the great mystery of what makes us who we are.

In that sense, Gupta’s stage version (part of the Edinburgh International Festival) is an interesting mash-up of detective story and memory play. As with the source material, the chief pleasure of the production derives from the flashback scenes of life as part of an unconventional (her adoptive parents were at one time card-carrying members of the Communist Party) yet fiercely protective family.

Kay’s numerous experiences of racism, whether casual or overt, are addressed with candour and a certain wry humour. As Jackie (played by Sasha Frost) notes, her parents’ repeated complaints to her school at least had the effect of stopping the teachers from racially abusing her. The author’s relationship with her adoptive mother, Helen (Elaine C Smith), is especially poignantly depicted. The gentle, slightly stumbling way in which Helen attempts to explain to the young Jackie why her daughter’s skin is a different colour from her own is profoundly moving, as is her generosity in encouraging Jackie to investigate her identity and trace her birth parents.

Inevitably, the sequences that work best in Dawn Walton’s production for the National Theatre of Scotland and Home, Manchester are those that sing most powerfully in the book. The opening scene, in which the poet meets her Nigerian birth father, Jonathan (Stefan Adegbola), in Abuja, and the born-again Christian approaches her as a sin that must be cleansed is blackly comic. Jackie’s hesitant coming out as a lesbian to her mother is also beautifully judged. 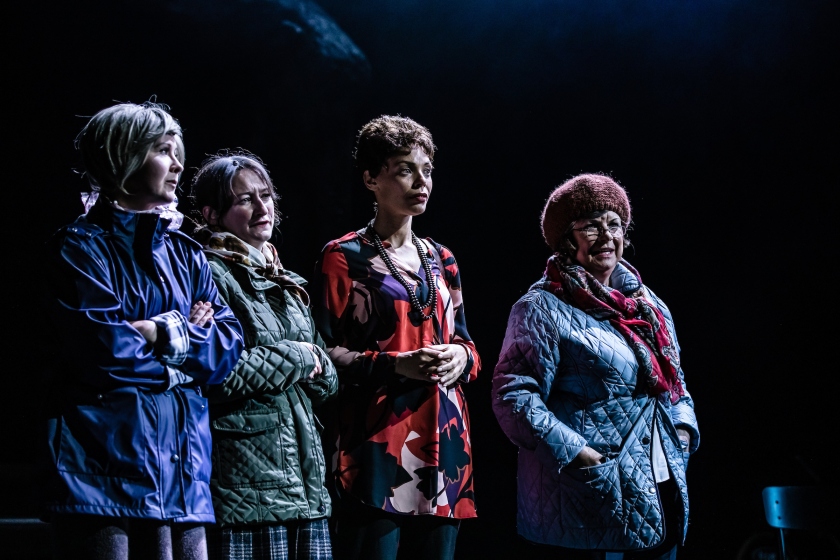 Gupta’s attempt to dramatise the story is uneven, however. A surfeit of exposition mars the early scenes, certain passages outstay their welcome and some of the supporting characters are thinly sketched. By far the most powerful sequence in the production is in fact one drawn from Kay’s poetry collection The Adoption Papers, in which Helen and Jackie’s birth mother, Elizabeth (Irene Allan) recount their contrasting experiences of Jackie’s birth. It makes you wish the whole show had been so tightly focused and perhaps a little less reverential to its source.