Cardboard Citizens has been making theatre for and about people with experience of homelessness for 25 years. Lately the company’s work has acquired an increased sense of urgency. In a poignant moment during this new show the cast passes around a list of the nearly 600 people who died on the streets or in temporary accommodation in England and Wales in 2017.

The show, written and directed by Adrian Jackson, digs deeper than statistics. The script weaves together six real-life accounts of people on the margins. As the performers are keen to emphasise, this isn’t a piece of verbatim theatre; much of the writing, although drawn from the headlines, is rife with speculation and one of the show’s threads is related from the point of view of a dog. The playfulness of the storytelling never undermines the seriousness of the subject matter. The production’s use of images and video footage of the people and events described here keeps jolting us back to reality. 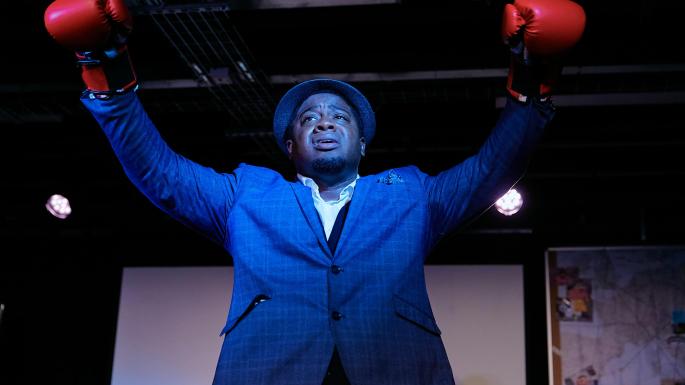 Perhaps the most familiar of these stories is that of Vernon Vanriel, the boxer who spent 13 years stranded and impoverished in Jamaica, having been refused re-entry to the UK, his home from the age of six. Jackson’s script also dramatises the tragic death of Dawn Sturgess, one of the victims of the Salisbury novichok poisonings, who was mischaracterised in sections of the media as a homeless drug addict. We hear about Pericles Malagardis, who was turned out of the police station he had attended to collect his beloved dog, and froze to death on the street while the duty officer watched DVDs. Jackson’s interweaving of all of these strands is a little puzzling at first but the piece, performed by a cast of four, quickly finds its rhythm.

The company doesn’t want us to confine our outrage to the comforting surrounds of a Fringe venue. As its title implies, the show includes a heartfelt entreaty to notice and engage with the human beings we may encounter crouched in shop doorways bearing cardboard signs. Meanwhile, the attention paid in Jackson’s script to stories of friendship, love and loyalty in misfortune layers the piece with an emotional depth that saddens and provokes in the manner of the best campaigning drama.