Published in The Times, Thursday 25 February

You couldn’t accuse the Lyceum’s spring programme of lacking variety. Having opened with a revival of Brian Friel’s Faith Healer, performed by three actors in an atmosphere of remarkable intimacy, the season continues with an exuberant staging of Brecht’s late masterpiece on a stage stripped to its back wall that, at times, barely contains the cast of 13 actors. 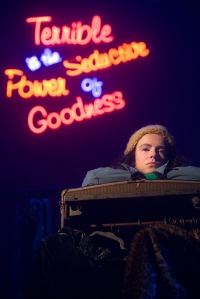 Mark Thomson’s entertaining, if uneven, production is based around a translation by the Scots-born satirist Alistair Beaton, which restores Brecht’s framing device, in which a dispute between rival communes over an area of farmland is illuminated by a play based on the parable of a servant girl who rescues and protects an abandoned baby. The atmosphere of unabashed theatricality is established prior to curtain up, when the ensemble, playing an array of musical instruments, mingles with the audience in the bar.

Brecht’s prologue is often deemed surplus to requirements, and Thomson’s production doesn’t really find its rhythm until we get into the meat of the story. From here on in, Brecht’s exploration of social and environmental justice is enlivened by the versatility of the actors (performing multiple roles), a large helping of broad comedy and a seamless use of live music, led by singer/narrator Sarah Swire with support from the cast. In suitably Brechtian style, Karen Tennent’s set design makes a virtue of poverty, with liberal use of plastic sheeting, while Michael, the baby, is created from an assortment of towels and bandaging that eventually grows limbs, feet and a personality.

If much of the show’s humour derives from crude gender stereotypes and a carnival of cross-dressing that gets progressively less amusing, the production does feature a handful of genuinely funny set pieces, including the sham wedding scene between the young girl, Grusha (played by Amy Manson), and Eamonn O’Dwyer’s ailing peasant, who miraculously comes back to life when news comes through that the civil war has ended.

Thomson’s production is at its most engaging, however, in the more humane sequences, with Manson giving an appealing performance as Grusha that deepens as the girl’s attachment to her adopted son grows. Her earnest determination is nicely offset by Christopher Fairbank’s nuanced portrayal of the rascally Azdak, who inadvertently finds himself on the judge’s bench, arbitrating between Grusha and the boy’s aristocratic biological mother.

Though the show is overlong and at times struggles to reconcile its mix of straight drama and satire, Thomson deftly pulls everything together in a tense final courtroom scene. If it sometimes falters when up against the more torturous aspects of Brecht’s storytelling, there are plenty of entertaining and moving moments.