In this compelling new production of Ibsen’s classic, the elegant drawing room set, designed by Jean Chan, with its large windows offering views onto an interior room, increasingly comes to feel like a wooden cage. Curtains blowing in the breeze give some sense of the outside world that in no way diminishes this atmosphere of claustrophobia. At one point, as the play moves towards its devastating climax, the walls roll forward, shrinking the space still further.

In the Lyceum’s production, directed by Amanda Gaughan, the stifling respectability of the backdrop clashes brilliantly with Nicola Daley’s vibrant performance in the title role. It has become something of a cliché to describe Ibsen’s most famous creation as the female equivalent of Hamlet, a protagonist whose motivations invite endless speculation. In this case, what makes Daley’s Hedda so poignant is her self-awareness: she approaches her own malevolent actions with the same mix of anger, sardonic humour and contemptuousness she applies to those around her. 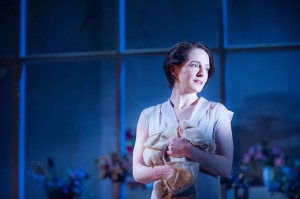 When she tells the insinuating Judge Brack (Benny Young) that she has no talent other than “boring myself to death” it is meant to be a throwaway line, delivered with a smile, yet it also offers a flash of the character’s gnawing self-hatred. In another exchange, when Hedda, faced with the reality of her husband’s financial situation, is asked how she can be so cool, she replies that she is “trembling for the outcome”. Daley’s achievement lies in showing how the internal conflict gradually disrupts her veneer of poise.

Gaughan builds momentum with care, culminating in a wonderfully tense set piece in which Hedda burns the manuscript of her former lover, Eilbert (Jack Tarlton). The thriller-like pace is enhanced by Richard Eyre’s version of the text, first performed in 2005, which feels fluent, lively and conversational without getting bogged down in colloquialisms.

There are moments, particularly towards the end, when the director appears to lose control of the action, just a little, and the interactions between the characters start to feel overwrought. The piece is at its most effective in quieter moments. Among the supporting cast, Young stands out as the predatory judge who tries to turn Hedda’s predicament to his own advantage, while Lewis Hart, as decent, fussy Tesman, comes into his own in the final scene. The real revelation is Daley’s multilayered performance in the lead, and it is appropriate that in Eyre’s version – unlike Ibsen’s – it is Hedda who is granted the last word before the curtain comes down.