O is for Hoolet: Four Stars

Unlike Bondagers, her regularly revived play about 19th century women farm labourers, Sue Glover’s The Straw Chair has rarely seen the light of a theatre auditorium since its first production at the Traverse back in 1988. Liz Carruthers’ strong, understated production for Borderline Theatre Company, now touring Scotland, makes you wonder where it’s been all these years.

The play was inspired by the historical figure of Rachel Erskine, Lady Grange (played here by Selina Boyack), kidnapped and left to rot on St Kilda in the early 18th century by a husband who feared that his political ambitions would be thwarted by her unpredictable behaviour.

Glover dramatises Rachel’s plight through her encounter with a young minister, Aneas (Martin McBride), newly arrived from Edinburgh with his 17-year-old bride, Isabel (Pamela Reid). Glover’s lyrical script, infused with references to the harsh beauty of the remote island archipelago, illuminates the myriad tensions wrought by this encounter. While naive Isabel is seduced by Rachel’s wild temperament and frank sexuality, Aneas’s pious respectability is thrown into relief by the deep faith of Rachel’s island chaperone, Oona (Ceit Kearney). 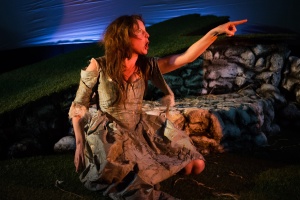 Carruthers gives due emphasis to the writing in a production that takes time and care to make its points about gender, power, abandonment and isolation. If this results in the occasional longueur, Boyack’s performance consistently lights a fire under the action, with the scene in which the three female characters bond while getting drunk on the water of life a particular delight.

Meanwhile, The Arches’ Behaviour festival continues with an absorbing new work by Ishbel McFarlane, this year’s Platform 18 award winner. Her one-woman show O is for Hoolet takes the form of a lively question-and-answer session, with the audience invited to interrogate McFarlane on many aspects of the Scots language, a subject the performer has spent years researching and campaigning on.

McFarlane’s informal style belies the depth and density of her show’s content. Multiple fragments, stories, folk songs and characters both real and imagined come together over the course of a single, carefully shaped hour to build a moving meditation on the politics and ownership of the words we use. Though the piece contains a passionate call to arms for the study and preservation of minority languages, including Scots, McFarlane never resorts to a hectoring moral righteousness; instead the show is as entertaining as it is thought-provoking.