First published in The Times, Tuesday May 3 2016

August Strindberg wasn’t the first playwright to portray marriage as a fight to the death, but his vision of a man and woman locked in symbiosis has certainly echoed down the years. The influence of his 1900 play The Dance of Death can be felt in everything from Edward Albee’s Who’s Afraid of Virginia Woolf? to pretty much every sitcom marriage of the Seventies and Eighties.

In Candice Edmunds’s production, presented in the Citizens studio, the artful back-and-forth between Edgar (Tam Dean Burn) and Alice (Lucianne McEvoy), sparring partners for nearly a quarter of a century, is made all the more intense by the stripped-back staging. Following an ironic opening rendition of the Owl and the Pussycat we discover the pair afloat on a precariously narrow platform, their proximity to one another heightening their reciprocal loathing while making them ever more mutually reliant. 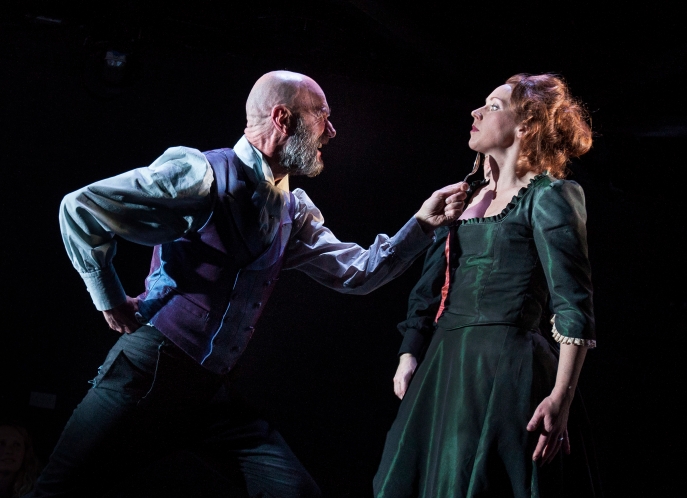 Graham McLaren’s ingenious set design raises the action above our heads, creating a mouse-eye view that further amplifies the vicious and unscrupulous nature of Edgar and Alice’s nightly battle. When she entreats her husband to “dance the Highland dirk”, with the intention of bringing on yet another of his “stupors”, the spectacle of a red-faced, puffed-up Burn thundering about the stage is the stuff of nightmares. Thankfully, Edmunds tempers the noise levels from time to time. The scene in which Alice uses Edgar’s shoulder as a stool from which she can observe their neighbours enjoying a party from which they are excluded, speaks volumes about their lonely interdependence.

Yet, the script, and the well-matched leads also offer glimpses into the anxieties that underpin this extreme state of affairs. As Alice, McEvoy moves between a provocative sense of poise and pressure-cooker intensity, but when she reflects on her former career as an actress, and the early days of her marriage, the emotion is heartfelt. Similarly, in his regular retreats to listen to underwater sounds and play with his telegraph machine, Burn shows us the frailty and weariness beneath his character’s ogre-like façade.

At 80 minutes straight through, Edmunds’s production is immersive in every sense. While at times painful to behold, Alice and Edgar’s circular battle is exhilarating and, in glimpses, all too believably human.