The Edinburgh-based visual theatre company Tortoise in a Nutshell is nothing if not versatile. Its award-winning 2013 fringe show, Feral, invited audiences to cram into a small venue to watch an entire town built from tiny paper models come to life before our eyes. The company’s latest work, presented in association with the Macrobert Arts Centre and Denmark’s Teater Katapult, is a different prospect entirely. All the action of this main stage production takes place on or around a solitary life-sized boat, tossed on a vast, undulating sea.

As with the protagonists of all the great seafaring tales, from Melville’s Moby-Dick to Hemingway’s The Old Man and the Sea, the lonely occupant of this particular fishing boat (Alex Bird) is preoccupied by more than his elusive prey. As the hour-long show opens, the fisherman appears resigned to succumbing to a watery end. The desolate seascape, rendered simply yet powerfully by Ana Ines Jabares-Pita, the designer, and Simon Wilkinson, the lighting designer, is disrupted by the appearance of a brightly-coloured fish (Arran Howie), who arrives on the vessel, literally bearing tea and sympathy. 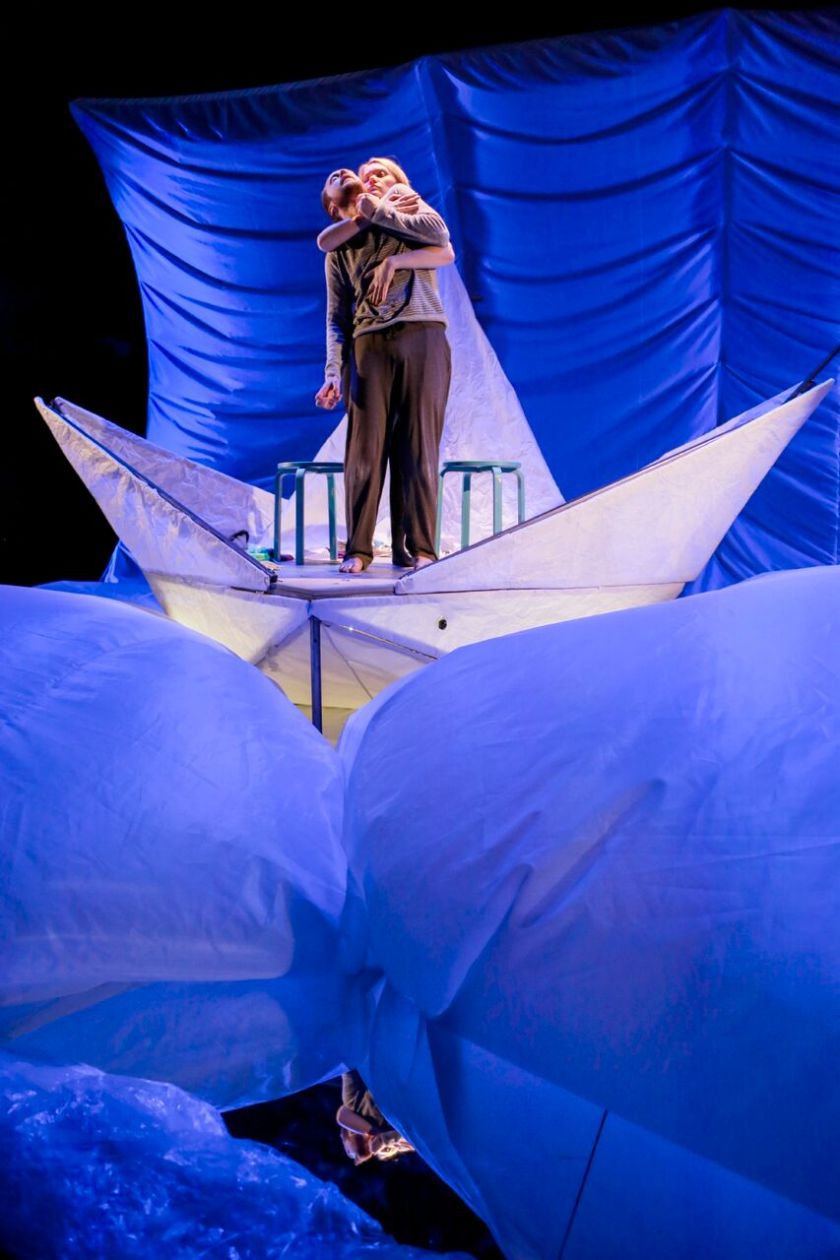 The fish’s recurring attempts to draw the man out of his despond range from the fleetingly effective to the deeply irritating. Her repertoire includes a motivational exercise class and an infectious dance routine, performed to the disco classic Last Dance by Donna Summer. When the fish reappears with a loudspeaker and starts prattling at high decibels, you begin to wonder why our hero doesn’t simply harpoon the waterlogged interloper and be done with it.

As the man frantically attempts to divest himself of the barnacles that have clung to his body in his inertia, so the fish gradually sheds her scales, and the two gradually move towards a deeper, non-verbal communication. The piece is at its most moving in these quiet, still later moments, even if, overall, the content comes to feel rather slender and repetitive, with the central metaphor becoming a little laboured. Original music, composed by Jim Harbourne, doesn’t always help matters. While a delightfully jaunty accompaniment to the more upbeat sequences, the soundtrack proves a little overbearing and obtrusive at the point of catharsis.

As you would expect from a company known for its attention to detail, the show’s canvas of gleaming blue light and slanting shadows makes for an appealing environment in which to submerge oneself for an hour, even if the rather fragile collection of scenes never really drifts beyond shallow waters.