At first sight, the two strands of Anders Lustgarten’s 2015 play seem, quite literally, worlds apart. Stefano (Andy Clark) relates the first of the alternating monologues. A former fisherman from a “little dusty island you’ve never heard of”, Stefano now spends his days and nights retrieving corpses from the tide of refugees who have drowned on the journey from North Africa to Italy.

The second voice we hear is that of Denise (Louise Mai Newberry), a half-Chinese university student from Leeds who works as a debt collector for a payday loan company in order to fund her studies. Though she experiences racial abuse on a daily basis, Denise clings to the job as a rather severe means to an end. She is determined to escape the poverty and cultural vacuum of her upbringing, even if, ironically, she now spends a large portion of her time battling to prevent her ailing mother receiving cuts to her benefits.

One clue as to the link between these two accounts comes from Stefano, in despair at having to salvage the slippery, eyeless bodies from the deep. “Do the migrants not understand Europe is f***ed?” In Denise’s wanderings door-to-door we are given a grim snapshot of life at the bottom of the social heap in the west, a world in which, like Stefano’s brother, highly educated people are scapegoated or required to work as kitchen porters and sous-chefs.

Lustgarten draws a line between these two characters faced with extremes of destitution. The subject matter is harrowing, and Jack Nurse’s production, staged in the round with the actors performing on a bed of sand, makes for an intense experience. Yet, while the playwright never shies away from his protagonists’ fears, the 70-minute play ultimately turns on their frail hopes. 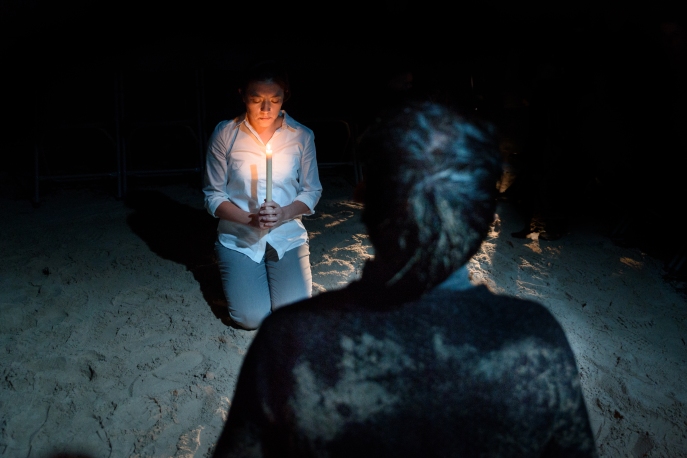 Stefano experiences a surge of optimism from his friendship with Modibo, a Malian mechanic, and risks his life to rescue Modibo’s wife when she crosses the Mediterranean from Libya in the midst of a storm. The tough Denise, meanwhile, is stunned when she receives overtures of friendship from one of her loan clients. “Why are people kind?” she repeatedly wonders.

Lustgarten can’t resist romanticising Stefano’s character nor does he entirely avoid hectoring his audience with statistics at times, notably in the scenes narrated by Denise. Still, the play’s finely observed details accumulate to reveal the universal emotions that drive its characters, their hopes, fears and, crucially, their endurance. Nurse’s well-judged production is enhanced by a soundtrack of increasingly insistent solo guitar, composed by Stuart Ramage, while both actors are convincing in their respective roles.