In the context of Scottish theatre, Molière, the nom-de-plume of Jean-Baptiste Poquelin, the 17th century French dramatist and actor, is pretty much synonymous with Liz Lochhead. The playwright and poet has notched up several adaptations into Scots of the comic maestro’s works, including Tartuffe, Le Misanthrope (rechristened Misery Guts) and L’Ecole des Femmes (updated as Educating Agnes).

Having translated so many of her theatrical idol’s plays, it isn’t hard to see why Scotland’s former makar should have been drawn to Poquelin’s life as a choice subject for drama. His personal history contained as much entertaining turmoil as any of his farces, though it was also pocked by tragedy. Not for nothing does Lochhead subtitle her work Whit got him intae aw that bother.

The play is set during the second half of Molière’s career, charting his growing reputation as a writer of irreverent comedies as well as the scandal that swirled around his politics and romantic entanglements. Jimmy Chisholm and Siobhan Redmond are brilliantly matched as proud “Pokey” and Madeleine Béjart, the playwright’s lover, muse and co-founder of the Illustre Théâtre.

Madeleine’s own backstory, which includes the conceiving of a daughter, Menou (played here by Sarah Miele), who was raised as her sister, wouldn’t look out of place in modern soap opera. That Poquelin proceeds to marry Menou, facing down malicious rumours that he is her father, adds a further layer of absurdity. Lochhead milks this bizarre love triangle for all its comic worth, but doesn’t flinch from the tale’s more poignant footnotes, including the death in infancy of Menou and Poquelin’s son. 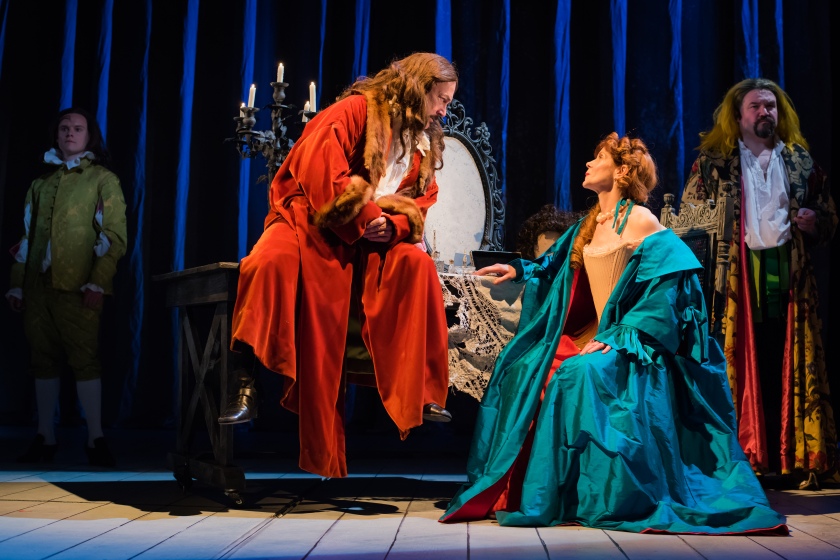 Lochhead is interested in more than biographical details, though. Her play is also a bittersweet, profane love letter to the process of making theatre, in which she pricks the pomposity of artists while celebrating the tropes and stock characters of French comedy. To this end Tony Cownie, the director, has assembled a cast of fine comic talents, including Nicola Roy, James Anthony Pearson and Steven McNicoll as a trio of narcissistic actors, who are lent further height and girth by Neil Murray’s extravagant costumes. Best of all is Molly Innes as Madeleine’s maid, Toinette, who observes of the company’s internal melodrama: “Folk aye talk a wheen o’ blethers.”

This is a story that Lochhead knows well, and there’s a lot of it to cram into two hours. Its final scenes in particular feel heavily compressed and it misses the presence onstage of King Louis XIV, Molière’s patron and sometime protector. Still, there’s much to savour in the sparkle and complexity of the script, and the cast has a ball creating characters worthy of the rich writing.